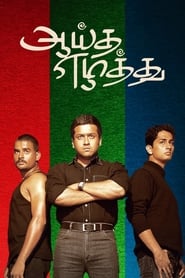 A multi-layered, intricately woven socio-political drama that delves into deep concepts like integrity, responsibility and unity through the intricately interwoven lives of three men, who belong to diametrically different strata of society. Written by Santhosh

A multi-layered, intricately woven socio-political drama that delves into deep concepts like integrity, responsibility and unity through the intricately interwoven lives of three men, who belong to diametrically different strata of society. Written by Santhosh

The movie is based on a premise - what would happen if an accident brings together 3 completely different personalities. At the very beginning, Inbasekar (Madhavan), a hit-man for a state politician, tries to kill Michael Vasanth (Surya), a student who advocates common people to take part in political system. Arjun (Siddharth), a student with US immigration dreams, is caught up in it as a bystander.

The story of each of the protagonist unfolds from this point. The story of both Inba and Michael moves pretty fast with incidents in Inba's life crisscrossing with that of Michael's. The script has been carefully planned and hence we are never confused. Arjun's background moves a little slowly though.

Madhavan has brought the dilemma of Inba very well - enforcing his power on the streets as a by force as well as being a ill-tempered but devoted husband. We feel sad that he gives up all chances of redemption in the end. Meera Jasmine, as his wife Sasi, has portrayed her suffering, in such a way that we empathize with her.

Surya has given a brilliant performance. Be it rallying the villagers to contest in local election or taking on the state minister with sarcastic comments, he maintains good poise and communicates his views sharply. Isha Deol as his girlfriend Gitanjali is good although her dialogue delivery is terrible.

Siddharth, as Arjun is good too - particularly, the scene where he instinctively jumps into the river to save Michael, although being dead scared. This scene forms a figurative basis for bringing out the inherent quality of compassion in him. He later lends support to Michael's path the same way - instinctively, although he does not understand the full meaning of doing it. His frivolous lifestyle before the accident is quite convincing too, although it may offend some conservative folks.

The script has one glitch though. It is not clear what motivates Michael to take a path which 99 % of the educated youngsters do not take i.e. involve actively in country's politics. He makes general statements as to the duty of good person to jump into political system and cleanse it. Although idealistic, this is not the real world situation. There is also a conversation with his mother where we learn that his father was some kind of activist, which could have been the genesis for such goals. However, as a viewer we do not feel for his cause as there is no specific incident or a goal portrayed clearly. Although unfair to the director, one way I can substantiate this statement, is by comparing it with another movie - 'Mudhalvan' where the protagonist is directly dragged into politics by a challenge posted by the Chief Minister or 'Lagaan' where the challenge posted by the British captain makes the villagers take up a strange path to fight him.

There are other characters well defined - the State minister, (Bharathi Raaja) who uses Inba to control his opponents, Arjun's caring but cool father, his younger brother - who helps him in his love life, Michael's friend - who gets beaten up for standing by his cause etc.

The songs of A.R. Rahman are very good as is the background music. They blend very well with the storyline. 'Jana Gana Mana' is the best of them all.

The fight sequences are very well picturised, particularly the final one, on the Napier bridge, amidst heavy traffic.

Overall it is a very good movie by Mani Ratnam.

Story with both a Heart and a Mind ...

I didn't really know what to think of "Ayutha Ezuthu" after the first time that I saw it - I suppose I was expecting a much different movie - but after revisiting it, I really have come to appreciate and enjoy it. Mani Ratnam is really a director who understands characters and shapes them with such heart and soul. The real stand-out actor here for me is Madhavan, who portrays Inba, the street thug who aspires to overcome his low-life existence but does it in all the wrong ways. The nuances of his character really show, and the 180-degree reversal from what we are used to seeing him as makes his performance all the more appealing. And Bharathi Raja ... wow! He comes off as a cunning and very humorous villain, and the exchanges between Surya and him are certainly something to see. I would least expect Mani Ratnam to put out something with a political message, but he does it with grace and style. A big thumbs up!

ஃ - These 3 Dots Mean Something... More Than You'll Ever Know

Back in 2004 when Ayitha Ezhuthu was first released, it was widely panned by critics and didn't do well at the box office. Why? It's simple: The film was much ahead of its time that the audience didn't understand this brilliant story line and the metaphors it carried throughout the film.

Ayitha Ezhuthu is a political drama directed by the genius Mani Ratnam who had previously directed movies such as Kannaththil Muttamital, Thalapathy, Bombay, Alaipayuthey, Iruvar and Dil Se. If you're asking me, I'd say Ayitha Ezhuthu is the greatest movie of all time in Kollywood's history and here's why:

If you haven't noticed there's also another hidden fact in the story. Remember the prison scene where Michael and the other students are locked up in one cell? Do you remember what Michael wrote on the cell-walls with that chalk? It was the Grand Unified Theory (GUT). This theory is also used as a metaphor for the film. The theory is based one three gauge interactions; strong force, weak force and electromagnetic force, which all helped to create earth. The strong force is Inba because of his anger and his lust for power and position. The weak force is Arjun because he always choose to avoid problems (for example when he admits Michael at the hospital he is told to give a complaint, but doesn't want to because he fears that his passport might be taken in). The electromagnetic force is Michael because of his mannerism, bravery and his guts over fear. As you all know by now, Ayitha Ezhuthu is an experimental film based on the Grand Unified Theory.

The film features an ensemble cast that includes Suriya Sivakumar, Madhavan Ranganathan, Siddharth Suryanarayanan, Meera Jasmine, Trisha Krishnan, Esha Deol in the lead roles, while Bharathiraja, Sriman, Janagaraj, Praveen, Krishna, Suchithra Karthik Kumar and Kamala Krishnaswamy in other pivotal roles. All the actors have played their characters well. For your information; The character Michael Vasanth (played by Suriya Sivakumar) is actually inspired by a research student named George Reddy who was known for his controversial involvement in youth politics. He was later murdered on April 14th, 1972 (aged 25) at Osmania University in Hyderabad, India (you can google him).

The cinematography and editing which were handled by Ravi K. Chandran and A. Sreekar Prasad deserve to be praised for the phenomenal job they have done. At last but not least, I have to talk about the Academy Award winner A.R. Rahman for the soundtrack and the mind-blowing score. All the songs in the soundtrack were amazing, especially the song ''Jana Gana Mana'' which is my all-time favorite song by Rahman. The BGM in the title card, the String Solo and the bit song titled ''En Jeevane'' are admirable and scores everyone should remember. Finally I have to give a BIG-TIME applause to the late Sujatha for the amazing on-point dialogues (especially in Inba and Michael's first meeting, the flirting scenes with Arjun and Meera, played by Siddharth and Trisha Krishnan, and the conversations between Michael and Minister Selvanayagam, played by Suriya Sivakumar and Bharathiraja).

For those of you who were disappointed with the movie when you were watching it for the first time back in 2004, give it another try now. I bet you'll change your mind and see the clear picture!

Saw ayitha ezhuthu on the second day at sathyam theatre.The crowd was unbearable and it took nearly an hour to get into the theatre. The movie was well worth the wait and the price of admission.Teasers of the story have been all over TV for a while now and i must admit i was very curious about the movie. Mani as usual has kept the story moving at a frenetic pace and the first half of the movie is exceptionally well taken. Credit must also go to the lead actors Madhavan and Surya for their performances.

Madhavan as inbasekar, turns in a menacing performance and simply steals the show. He seems to have finally lost that chocolate boy look with his new haircut and added weight. While plenty of praise has been heaped on Abishek bachchan for his role as lallan singh in the Hindi version "yuva" I believe Madhavan has done a better job and if any considerations for a national award are given to abhishek bachchan without considering maddy i would be very disappointed. Surya as Michael Vasanth the do gooder is also excellent. He seems to be improving with each movie and is all set to be the next big thing Tamil Movies. What a change from the guy who couldn't even dance confidently in Nerukku ner!! The third character siddharth as arjun balakrishnan is adequate, although i don't know why he was needed in the movie. While the first half of the movie is almost perfect the second half seems to try to finish things in a hurry. Perhaps he need not have spent too much time with siddharths character. The heroines have surprisingly found adequate screen time in such a big multistarrer. The best of the lot is meera jasmine as sasi. Esha deol is OK for her first movie and trisha is also OK.The movie is easily the best movie to come out so far this year ahead of autograph, virumaandi and gilli. I give it 9 out of ten taking one point off for a slightly loose and hurried second half. Spoiler -- One thing that most people did not understand after the movie was whether madhavan was given the death sentence or not. I'm not sure although i thought the policeman said he was lucky. Not one person that i asked after the movie seemed to know for sure.