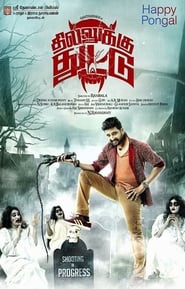 The film is a love story with elements of horror. The protagonist is a man who shows off his bravery and also manages to scare ghosts.

The film is a love story with elements of horror. The protagonist is a man who shows off his bravery and also manages to scare ghosts.

Probably the greatest bullshit ever

Wow, a film without Samuel L. Jackson in it! So, he doesn't act in Tamil movies yet... Maybe soon, you never know with Samuel... OK, let me tell you a few things you need to know before you watch this. You really need to buy yourself a gun with real bullets, because you'll have to pull a few in your head after the film finish. If you'll resist until the end. Better take my advice: kill yourself now, because you'll die more peacefully. If you see the movie until the end, you'll kill yourself anyway, I can guarantee you, only that you would be very angry, you will not die quietly at all. In the storyline it is written: "The film is a love story with elements of horror. The protagonist is a man who shows off his bravery and also manages to scare ghosts." Let me tell you how the things are: The film is a s..t story with elements of stupidity. The protagonist is a man(probably) who shows off his bravery and also manages to scare all the viewers who have a brain in their head to not come again in a cinema.

Santhanam, who's quite popular among Kollywood fans despite usually playing the hero's friend or comic relief, is back as a lead hero after Inime Ippadithan, which did find considerable favor among the audience. In Dhilluku Dhuddu, the funnyman may not have the best script to back his rib-tickling skills and pleasant screen-presence, but he more than makes up for the sluggish screenplay with his charm and effortless humor, able to evoke at least a mild chuckle out of the most forceful and drab comical elements.

This time he plays a staunch disciple of the deity, Muruga, who decides one day to go for a vacation to an outlandish bungalow, with his fiancé, Kajal, and their families. Once there, strange occurrences begin to occur, and both the families quickly get embroiled in a sticky scenario, which not only leans toward the supernatural, but also offers many comical situations, whether intentional or intentional.

The plot is quite flimsy and has been done to death in previously similar horror-comedies, but Rambala's direction keeps things moving along at a decent pace, ensuring that you're moderately engaged in proceedings. Rambala perfectly understand Santhanam's strengths and exploits them to full advantage. However, he could have easily done away with the over-the-top, glorification shots of Santhanam, and instead paid more attention to making the romantic track between the lead pair look more natural. In fact, the first half has way too many unnecessary heroic entries, which detracts from the actual narrative quite a bit. It's only after the interval that the film picks up steam and things start falling into place. This is where Rambala's and Santhanam's combined talents come to the fore, and they manage to salvage Dhilluku Dhuddu just enough to make it passably engaging fare.

Where the movie scores is in its one-liners, with Santhanam getting to mouth some cracking and hilarious punch-lines, which should appeal to both the classes and masses. He's also shown great improvement over his last film as a solo hero, and it's to his credit that he carries the weak script and some of the other actors on his shoulders. His romantic interest, the debutant Shanaya is pleasing to the eye but needs considerable work on her dialogue delivery before she can be considered for more-important rolls in bigger films. The other actors fail to leave a mark.

Dhilluku Dhuddu also benefits from Deepak Kumar Padhy's cinematography, which evokes a chilling atmosphere and an eerie feel throughout the film's runtime. Thaman's background score also backs up the visuals, but his songs barely pass muster. Gopi Krishna's editing also does the job as he manages to offer some brilliant jump scares and shock moments.

All in all, Rambala's transition from the small to the big screen in his debut feature is mostly smooth, but the choppy parts are too distinct to ignore. He shows promise in handling the humorous scenes but falters more times than can be overlooked, when it comes to inducing scares and building the suspense, which could also be attributed to the messy script. Santhanam's presence and the funny dialogues are what help Dhilluku Dhuddu stay afloat.