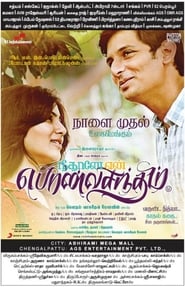 Varun and Nithya are childhood friends from the age of eight. They fight and break up when in school and in college too they repeat the rigmarole of falling in love and then breaking up over silly issues. Finally, they meet once again at 25. And once more history repeats itself till the inevitable happens all over again. Written by Rajiv

Varun and Nithya are childhood friends from the age of eight. They fight and break up when in school and in college too they repeat the rigmarole of falling in love and then breaking up over silly issues. Finally, they meet once again at 25. And once more history repeats itself till the inevitable happens all over again. Written by Rajiv

Credits to Gautam who has nicely crafted & portrayed this film.It is excellent piece of narration which can be felt by few who had similar story in their life.

Background score & music adds much value to a script and none other than Ilayaraja can give this feeling. Thanks to Gautam who realized this well and bring contemporary musical retreat to Isaignani fans.

Samantha deserved this film and this has definitely revealed her talent.It would be one of her best movies and its obvious she would get more opportunities in upcoming flicks.

Jiva though this film not suit him (poignant character) he has done his assignment pretty well. Santhanam good for his renowned timing jokes who contributed well for this film.

Finally ,thanks Gautam ..for the 1st time ever in my life,u made me to scribble this review :)

Film for True lovers and Especially for a True Girl who is in love!

Only the People who knows the Depth of Love and Pain in it and the who misses someone badly,A "GIRL" who loves his "GUY" Truly/badly will love this wonderful Movie "Neethaane En Ponvasantham",yes this movie is only for the True Lovers and not for all..and its a Girl's Love Story!:)

And the one who said its a Bad/Mokka movie is the one who dose'not know what is "Love" or else the "ART of Filmmaking" or the usual Masala movie lovers.This film beautifully showcases the Egoistic nature in the couples,how the fights are happening between the couples in 'Reality'..And,those who said the songs are misplaced,or too many songs in the films,Come'on its a different or NEW way of "Storytelling"..Gautham conveyed what he wants to tell to the audience through SONGS,he incorporated the songs through the Screenplay(Matured people ll understand,i guess)..Oh God! the Acting of SAMANTHA was chance less..after watching this film i have became your fan officially :P,basically i was not impressed by your beauty at all,and now to be agreed that you are beautiful and u are an wonderful actor too!:) Jiva too acted well,his romance and egoistic behavior acting was totally good..but i was very impressed with Sam's acting much than Jiva's acting!..Gautham well used Maestro Ilayaraja sir by the beautiful songs,generally every director wants the situation BGM from him,but GVM used him differently by songs and pictured on the screen well..I particularly liked the breakup scene b4 the Post interval and it was Great..:) :)..

But technically the film is not up to the GVM film standards..Cinematography was above average,few angles were good but some of the top angles didn't suite according to the situation..and slight scenes were not executed properly and also Editing was Horrible,these were the flaws in the technical dept!

Note to mas-ala movie lovers : "If you don't like artistic,realistic,slow paced movies..don't say its Bad/Mokka movie,Just because it did not ENTERTAIN u dose'not means the film is BAD,and u guys are unlucky to watch these kinda movies and u guys don't deserve to tell these kinda movies(3,anbeshivam,Maniratnam sir movies movies,etc) the word MOKKA".

Note to GVM : Thank u very much sir for delivering a warm hearted soulful movie! and am proud to say that "Am" your FAN!! :) :) because even though u gained much popularity or more fans after VTV,u dint make this film as COMMERCIAL one just to maintain your fan-level,u proved this is your way of filmmaking and will not allow any commercial add-ons in your movie!!..In that am proud to be your FAN sir!!...

Note to Lovers : If u love someone badly/truly don't make them hurt or Don't break-up at any point or situation,Love actually makes u immature and u need to overcome that immaturity and need to understand the problem and try to make the solution for it..When it comes love,Time and Education will not permit and it will resist u and so u guys need to handle the situation well,so that need to be Matured first!! and final thing don't make YOUR GIRL CRY,she will not bare that pain (My opinion after watching this movie)....and also Before accepting the love the BOY will be mad in love with her and after the girl accepts the "Love"..She will love more than the boy!...#True Story

Neethaane En Ponvasantham: Wow!!!! Another wonderful movie from Gautham Vasudev Menon.... Once again a sensible love story and A feel good movie... Sure many people wont like this movie(like VTV).... But while seeing this film, oru sema feel... chance-less....

jeeva n samantha acting is awesome.. the chemistry between them wrkd well..Maestro rocks in BGM...

The movie is really a slow-pace movie, only few people will like this film like VTV. The main thing is, the people who likes this film knws "what is in-depth love"... If u liked VTV, don't miss this one....

Another Outstanding Movie From GVM. Don't miss it watch it in theater for beautiful experience.

Actually to start with I am a big fan of the director's work right from minnale,Kaakha Kaakha,Vettaiyaadu Vilaiyaadu,Vaaranum Aayirum, VTV and now this movie has topped the list.

After listening to all the mixed reviews from friends and internet, I initially was puzzled (Before seeing the movie).So to check it out myself, I booked the tickets for the movie and went to the movie with my friend. For your information " I have watched Varanum Aayirum, Kaakha Kaakha, Vettaiyaadu Velaiyaadu and VTV the First day of the movie release. For all the above movies I had liked the way the directors narration and his choice of music. So, before I reached for the theater I had listened to all the songs of the movie and they had stroked a chord in me. And all that I had in my mind was, its GVM's movie and after a long time Isaignani has composed music for it which makes it even more special and was more than enough for me to head to the theater.

While the movie started I clearly has no idea of what it was going to be and I serious was before the screen without any kind of eyes shining expectation. As the movie started I really started enjoying the movie and its unique way of narration with the songs. The one thing that went echoing on my mind was "How could people not enjoy the movie??, its unique narration and one of its kind..!!" Both Samantha and Jeeva have played as Nithya and Varun have done their best might. Especially, Samantha was just mind-blowing with her expressions and acting. She has lived as nithya vasudevan and totally took the screen presence over jeeva in many places. Santhanams timing comedy has made the movie even more enjoyable.

The best part of the movies is its BGM's and Songs which actually has driven the movie like the director (GVM) says in many interviews. The director has treated the story genuinely without any little consideration of commercialization to make it a box office hit like other directors do expect bala, maniratham and vetri maaran. Actually we people should have to accept the fact that he has tried out something really different and unique he stands out of the crowd. Salute to the brave attempt.

I hear people say " Its a slow paced film, Yes it's a romance-drama movie and it is entitles to its own pace do you expect it to have all the crap features that these mas ala movies incorporate these day that you have used to watching all these years or what??. One a full moon day, if you are traveling down a riverside in boat with your lady love the only possible way that you enjoy the ride is to ride slowly spending some quality time with her, not through flying in a helicopter understand difference. Its quite obvious that most of GVM's love movies are slow paced, you have chose to watch it knowing them all. If you're ignorant am sorry for you. Plus, it's the way its meant to be.

I just loved the second half and its narration, I hear people saying " There is always songs that is coming repeatedly and in-between scenes" Yes, people that is the best and beautiful part and which I loved and enjoyed the most out of it. The placement of the songs in the second half is an outstanding piece of work by GVM and Antony, hats off for both of them.

In the climax, when all the conversation ends and they both kiss the BGM of The Isaignani comes in.. Man, I was speechless and Out of the world, he has lived up to the standards. A Royal Salute to The Maestro, We love you as always..

Above all the feeling that I had after watching the movie made me overwhelmed with a everlasting feeling of love and a self pleasing state of delightfulness. For which I watched the movie for 6 times in theater.

At the nutshell, from the bottom of my heart I loved the movie and strictly for those to know the meaning of in-depth love and its pain.

P.S Thank you GVM sir for such a great movie, always a fan for your works. This is my very first review about a flick. Excuse me if you happen to find any flaws.