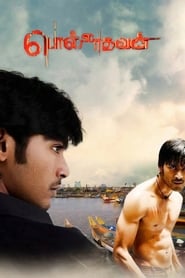 A contemporary action drama that revolves around a young man's love affair with his bike, and the trials and travails is forced to undergo when it is lost.

A contemporary action drama that revolves around a young man's love affair with his bike, and the trials and travails is forced to undergo when it is lost.

Cult Hit, to be Remembered!!

"Polladhavan",popular debut of Vetri Maaran,and second innings break for Dhanush in his career, is a Cult favourite for its screenplay which cruises on the voice-over of the two lead characters,Prabhu and Ravi and also for its realistic depiction of the life of slum and the adventures when two young men,as distinct as chalk and cheese rub against each other.

The Director focuses on details of characters,events rather keeping watch on the continuity of the film. Vetri Maaran is to be appreciated for the well developed, significant and powerful sub- plots of the film.The sub-plot of the ego clashes between the gangster trio,"Ravi","Out-u" and "Selvam"is a treat to watch and is a classic portrayal of North Chennai Gangsters and is very significant in the climax of the film.And the Sub-plot of the proceedings of Prabhu's family is reality ground and very relatable.

The love sub-plot of Prabhu with a girl seems unnecessary,but Vetri Maaran has under-written this love sub-plot by placing music- video style song montages,which is reasonable in the first half of the movie, but later annoys us in the second-half,where interesting main plot of the story is disturbed by unwanted song montages which is a shame for the director having done a film so close to perfection.

But Vetri Maaran wins our heart with his sub-plot which tells Prabhu's love for pulsar motorbike!!This is the most beautiful and blissful part of the movie, every male is sure to cherish even after a long time.And Dhanush wins our heart too, with this sub-plot and we have no choice, we become a fan of Dhanush.No wonder this movie ignited the star-dom of Dhanush.

The Inciting incident,which triggers the main plot, comes towards the end of the first-half when the stage is set perfect after the two lead characters have narrated their stories enough for us(Vetri Maaran's switch of narration between the two leads is to be seen in the film) to follow them then after until the climax which is a thrilling, action filled experience.

Enough spoken about Dhanush, the other lead Daniel Balaji gives a performance which in intimidating and powerful, which takes the film to another level,also accompanied by the performance of Kishore,who lives a true gangster and also not to forget the performance of Pavan who plays "Out".Banu Priya,Murali fit the family roles so good.Special mention to Sentrayan,who plays the bike thief is a revelation,and Anju who plays Gangster's wife, a very rare role to T.Santhanam and Karunas complete the script and give it the realistic feel.Ramya has done justice for her job,though she is placed in the most annoying portions of the film in the second half.

Vetri Maaran says he is inspired by "Bicycle Thieves" for this film,while he just shares the one-line and some few segments and Polladhavan if far different from the Italian Masterpiece.Yet a very bold gesture.

If not for the flaws and commercial elements forced, Polladhavan is sure a Masterpiece, but unfortunately it fails,yet its ripples will be felt forever for all its goods and is a Cult-Hit!!

The Only Masala Movie From Vetrimaran

This has to the only movie made by Vetrimaran for commercial purposes. Nevertheless, i enjoyed this movie as a Dhanush fan (to be specific, the comedy scenes as a Santhanam fan). Vetrimaran's non-linear style of directing is always something to applaud but it is much more polished in his other movies like Vada Chennai

This movie not just entertains you but also connects you along with the movie ....it's a fantastic movie and dhanush acting was so natural and the fight scenes and scenes with the villain were so realistic