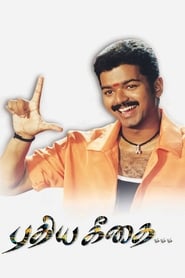 Sarathy is a brilliant and carefree young man who is unaware that an astrologer has predicted his death at the age of 27. Eventually, he comes to loggerheads with Reddiar over a land deal gone bad.

Sarathy is a brilliant and carefree young man who is unaware that an astrologer has predicted his death at the age of 27. Eventually, he comes to loggerheads with Reddiar over a land deal gone bad.

The Best Theme ever dealt in an Indian Movie, so far - YOU

What do you expect out of an Indian Movie? 3 hours of mindless Clichéd Entertainment - Action, Songs, Dialogues, Unrealistic Villains, Forced- to-be-hot Heroines, all glorified, targeting the Hero of the movie. Well, that's how movies get made here, and you should not question it until you have something new to say. Then who, in India, would watch your movie? Definitely, not the masses.

Yet, if you have a radically new idea - a Very Positive, Priceless Souvenir for the (Sensible) Audience, something directors in India never dared to touch or experiment with it because of fear, and yet you wanted to communicate it to the Indian Audience, who never got freedom from Stereotypical movies, then you got to do it Brilliantly. And that's what K. P. Jagan did, in his Debut movie - A Wonderful tale of the Power of the Human Mind, Human Belief and the Human Soul, told in an Indian Fashion, Blending with Masala stuffs - without making the audience lose their temper in a New Experiment.

In a land where Legends considered worthy of Inspiration are always (mis)interpreted as justifying Revenge, Spite, Anger, Selfishness, Jealousy and other forms of Short-Minded approaches to life's problems, Jagan teaches how to tackle these problems with an Extremely Matured View of Life, Love and Humanity - Never in the History of Indian Cinema, have I seen a Character as Strong, Beautiful, Thought-Provoking, Inspiring, Motivating and Impacting as that of Saarathi, played by actor Vijay (WARNING - DO NOT watch any of Vijay's later movies. They are just Total Crap compared to this one). Each and every Dialogue he is asked to say, is completely appropriate to the scene and has No Narcissism involved (Sadly, Vijay's later movies were full of these Crap). Some of the Dialogues and Scenes, are the Very Souvenirs I was talking about. When you are Worried, just think about Saarathi. Some of the Most Inspiring Moments (Non-Stereotypical) to boost your energy, Watch these:


Yes, if there is anything that pulls you back, in this movie, then it's got to be the Unnecessary Masala stuffs induced into the story through Heroines and other characters and the very Indian way of Presentation. But, by the time you reach the Final part of the movie, you would have your Energy back, gripping your seats and your eyes on screen (Not the kind, expected by filmmakers, in other movies). And if I believe you to be Not-So-Hard-Hearted person, the Climax will definitely make you Cry for the last moments and make you Smile again after Hope is restored - No Indian Movie has done this ever, and from West only Forrest Gump has moved me besides Pudhiya Geethai.

Why don't filmmakers make these kinds of movies? What on Earth makes them believe Clichéd Movies are loved by everyone? I can just get Inspired from Saarathi and Hope that Hope's not lost... ;-)

PS - Sorry for the EXCESSIVE use of CAPITALS. I didn't get any other way of Personifying the elements.