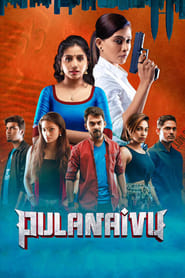 Aishwarya, a young and beautiful woman who is just starting college, is trying to move on from her previous relationship. So she is not interested when one of her new friends falls for her and tries hard to earn her love and attention. As their love story develops, a murder suddenly occurs.

Aishwarya, a young and beautiful woman who is just starting college, is trying to move on from her previous relationship. So she is not interested when one of her new friends falls for her and tries hard to earn her love and attention. As their love story develops, a murder suddenly occurs.

Manjula Joseph Jeyabalan as Self

Dont miss even 1 scene! Worth every penny

Geethaiyin Raadhai, Thirudathey Papa Thirudathey, Rail Payanangal and now Pulanaivu shows her graph as a director and actress has just increased vividly. Loved her performance and the story line. I would say the story is the hero of the film with the BGM score which was accompanying the film well. Kudos to Shalini Balasundaram. Keep giving films like this don't care of the hatred, you rise higher girl

I actually created this account just to vent my frustration of being deceived into watching this movie. Have to admit, the "public review" stunt where public were interviewed right after the movie and sharing those videos on Instagram was a smart marketing tactic. While watching those videos I thought to myself of course they are going to say the movie was great, Shalini was standing right behind the camera. They can't be honest. But nevertheless, I decided to watch this movie.

I hated Geethayin Raadhai. It was a snoozefest. TPT was even worse, dozed off in the theater. But this movie was actually interesting up to a point. I was thinking, wow the director finally learned how to deliver a movie which is not boring. Up until the intermission, I was genuinely interested in knowing what happens next. So there is definitely alot of improvement in this movie, compared to her previous movies. Kudos.

But, the movie fell apart after the hour mark. The plot, the screenplay, everything in the most disastrous way imaginable, until I couldn't wait to leave the theater.

1. I went in to watch a murder mystery thriller, and I got exactly that for an hour or so. But what I got was love triangle. Not 1, but 2 love triangle. And at that point, I stopped caring who loved who and who killed who.

2. Screenplay. How many times you are going to shuffle between Day 3, Day 5, Day 4? Was it even necessary? I got confused, not only me, my friends got confused when certain events are taking place. I actually think the movie would have been better without the orange box on the bottom left telling us which day it was every now and then.

3. The Investigation Process - A successful murder mystery always has one clue leading them to another clue. And that leads them to the next. I can't remember anything like that in this movie. Very less attention was given to the actual crime scene, the weapon used, the victims time of death. These are things a detective usually starts with. The scene where Bhairavi had a meeting with her detectives, was the worst scene. Not one clue stuck on me and made me interested, because it was just a barrage of irrelevant information being thrown swiftly to the audience. As an audience, I want to try to connect the dots myself. At the end of that scene, I was like ennanamo solringge, neengalle ethachum kandupudichikongga da.

4. Predictability - It was easy to know who killed Preethi. When they interrogated the boyfriend for the first time, I felt okay this guy is claiming he loved her, yet she was dead and he made no efforts to find her, to contact the police. To cooperate with the investigation. Then they revealed Preethi was the get angry quick type, so i confirmed okay it's going to be an accidental murder, the boyfriend did it because no one else would get into an argument with her. I actually thought they are going to subvert my expectation and make Shalini the killer, but they didn't. It happened just as I expected. Which was dissapointing.

5. Logic - Alot of why's. At what point did Bhairavi believe the shootings happening to her family was caused by her investigating the Preethi murder case? An experienced police woman will have put away many people in the past, and thus has many enemies made. There was not a single connection. Yet Bhairavi, in the hospital after her husband was shot, says I must solve this case quickly. Avala naana ne pathurren.

Illogical character development - How did Kabil change from being such a caring person, a classmate and friend, whom gave comfort to Shalini when she broke up, to a kidnapper and potential rapist?

How on Earth did they have a gun? Were they moonlighting as cocaine smugglers, some underground mafia? Okay leave that part. Shalini was kidnapped and tortured for days. Her ex who came to rescue shot Kabils friend to save her. Why run? Why try to hide the murder? Ever heard of killing in self defense? We have a witness in Shalini who can say in court these people were trying to rape me, and my ex who came to save me shot the guy to protect me. And as we all know, it's very easy for the police to believe whatever a female victim says. Problem solved. But what the director did instead, is make them both panic, and the ex killed himself because he killed a kidnapper and potential rapist. It's just so stupid.

I could keep writing about the wrong things in this movie but I don't have the time. One last thing, stop casting Kabil as Shalini's love interest. Both of you are good actors, but on screen it always appears to me like Akka Thambi. Liked Krithigah's acting, she was so irritating in her santhegam paduran mode, which means she did well. Shaila Nair carried the role well too.

Overall, this movie is not a murder mystery. It had murder, love triangle, but no mystery. Lost interest in how they are going to end the movie towards the end. Shalini, if you are reading this, I would like to tell you one thing. Everyone around you would appreciate the movie, tells you it's perfect. Those comments are of no use to you. I have seen the improvements you made in this film, and I see potential in you. Just see this review as something from a close friend, who doesn't care about your feelings but just want you to improve.

Good luck in your next movie.

A Jumbled Up Mess which was not so boring.

The film was totally awesome. Filled with twists and turns you will definitely be unable to predict the climax of the story. For a Malaysian Film,It was a really great film. I strongly recommend you guys to watch it.

Watched "Rail Payanangal" and had a very huge expectation. Paid for the movie on Astro Box-Office with same expectation. At one point the movie had some good triller concept but ends with nonsense reason. Something just not connected. Plotting too much of story line in a same movie requires a good narrating and story line but this movie end up with hopeless ending.

My suggestion is, dont do triller movie if you cant think out of the box. I feel cheated by paying for the movie.

Again dont use the same cast from previous movie, it seems bored with same face and same acting style. Get some fresh face and talented one.

Also try to limit the make up used for the actress face, it looks horrible.