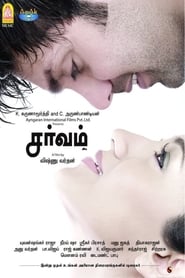 After a man looses the love of his life in an accident, he sets out to find the boy her heart was donated to. But soon it is revealed that the boy himself need to be protected by a man, who wan't to kill him. So Karthik stays to protect the young boy, as he is the only thing he has left of Sandhya. Written by STK

After a man looses the love of his life in an accident, he sets out to find the boy her heart was donated to. But soon it is revealed that the boy himself need to be protected by a man, who wan't to kill him. So Karthik stays to protect the young boy, as he is the only thing he has left of Sandhya. Written by STK

When a technically sound film like Sarvam evokes mixed reactions from all quarters (didn't register with me), one is invariably drawn to the conclusion that the source material is probably flawed. This came up during a discussion when my uncle expressed surprise at the director's choice of subject to make a film. This is something that has fascinated me to no end. How do film-makers pick one idea out of the many that cross their minds as the one most appealing to them, most likely to appeal to an audience and also the most demanding of their faculties ? Vishnuvardhan's (director) choice of the story, particularly the narrative, is the intriguing thing about the movie. Sarvam comes under the category of anthology films (Aayidha Ezhuthu) where different sub-narratives are connected by an event, person, place etc. Despite the success of Amorres Perros and the popularity of Aayidha Ezhuthu with youngsters, I doubt if making an anthology-based narrative hinge on an event will gain widespread acceptance. Four Rooms, to me, is as quirky and self-obsessed a movie as can possibly be. Inspite of this, the connecting thread between the four disjointed tales being a person (Tim Roth) lends perspective to the film. Aayidha Ezhuthu involved a place (Napier's Bridge) along with an event as a connector of sorts but it evaded this issue by having three story lines featuring male protagonists who represent three answers to the same question. The point being made is that switching perspectives is the last thing an Indian audience wants to do once it has got a grip of what the story is about and what might unfold. This is somewhat analogous to the preference for full-fledged novels over short-story collections.

Also, movies that change track dramatically just about halfway end up being two different movies eventually. Such films are usually successful when the switch connects with viewers. Sarvam will probably go down in the books as one that didn't. With the result when the switch came, the second half had virtually no participation from me as is possibly the case with many. In other words, for this film to work, it needed to put up a strong case for J D Chakravarthy's character and generate more than just the odd sympathetic nod. In my view, it didn't. Despite the overall feeling of distaste, certain aspects struck me as being worthy of praise. Firstly the cinematography. Few during the eighties and the nineties would have anticipated a surge in this aspect of film-making. Cinematographic excellence is now so frequent in Tamizh cinema (the legacy of Balu Mahendra and Mani Ratnam) that it leads one to believe that soon, it will be taken for granted. Even so, the work here towers above the rest. Be it the songs or the sequences in Munnar, Nirav Shah and Vishnuvardhan work wonders with the camera.

Trisha along with Ilaiyaraja's Mella Mella make the first half worth it.

Sarvam - the pain of loss

Loss. Bereavement. Vengeance. This is what 'Sarvam' is, in a nutshell. Went to see Sarvam at Satyam Cinemas today morning. It was a different experience, as we woke up at 7:15 and were rushing to the Theatre. Chennai was cool as a result of the rain yesterday night. The theatre was filled with a good crowd. The movie started exactly on time, at 8:30.

Before the movie began, we see the disclaimer which reads: 'All the incidents in this film are fictitious. Until they happen to you'. We see an upanishad quote about death. The film begins with Chakravarthi shouting in anguish inside a dark forest.

The film cuts to Arya, and the introduction song. We learn that Karthick (Arya) is an architect. He meets Sandhya (Trisha) in a go-carting race, and falls in love as soon as he sees her. Sandhya is a doctor, and so Karthick goes to her hospital and tries to woo her. Sandhya hates Karthick as she thinks he is not serious about life. Gradually, she falls for him, and the two happily enjoy life. We also see Eashwar, a man who has lost his wife and his son in a road accident. Eashwar thinks that it was Naushad, the man who accidentally hit Eashwar's wife and son with his car, who is solely responsible for their death, and he repeatedly visits Naushad and threatens him that he doesn't understand the loss Eashwar has undergone and he will only understand it if his own son dies. Naushad has a little boy, and Naushad finally hides in Munnar, fearing Eashwar.

It is at this point that the story takes a serious turn. Sandhya dies in a brutal accident, and Karthick is devastated. Sandhya's father tells Karthick that Sandhya's heart has been transplanted and it's Naushad's son who lives with her heart. Karthick becomes emotional and goes on a trip to find out Naushad. By following Karthick, Eashwar too arrives at Munnar.

What happens at Munnar forms the rest of the story. Was Eashwar successful in his mission to kill Naushad's son? Was Karthick able to overcome his grief? See the movie on screen.

Sarvam is directed by Vishnu Vardhan. Now, all his previous movies are stylishly made (Arindum Ariyamalum, Pattiyal, Billa) and this one too, is brimming with youthful scenes right from the beginning till the intermission. The first half is romantic and is fun to watch, especially Arya's repeated attempts to woo Trisha.

The second half is totally different from the first half and the story takes us through the beautiful locations in Munnar. The climax is a bit dragging, and I found it uninteresting. Except the final 30 minutes, this film is worthy to watch.

The story has been woven around the central theme of loss. The pain of loss. We see Eashwar gradually getting afflicted with the psychotic obsession of killing Naushad's son, as he thinks he lost his wife and son because of Naushad. Naushad too, talks in a don't-care manner when Eashwar comes to Naushad's house for the first time. All this adds up and Eashwar decides to kill Naushad's son to make him understand the pain of losing the dearest ones. On the other hand, Karthick too suffers the pain of loss when he loses Sandhya in the accident. But, Karthick's mindset is to prevent others from experiencing such a kind of pain, and that's what he exactly says to Eashwar when they both meet up in Munnar. This difference in mindsets is what makes the film worthwhile to watch.

The camera was good, especially in the scenes filmed in Munnar. Nirav Shah has done a good work. The music too is okay. While seeing the beautifully filmed songs, I was not able to stop thinking about Vishnu Vardhan using Rahman in this film. It would have been absolutely brilliant if Rahman had scored the music, as that would be a perfect match with the camera work. Yuvan was also good with the songs but somehow I felt Rahman would have been the better choice, while seeing the songs.

Arya has done a cool job. Although he is very predictable in some scenes, he is okay. Trisha was beautiful. After a long time, she has been shown in a great way, and is cute and attractive. Chakravarthi is the antagonist, and he looks like a younger Kamal Hassan in some scenes. He has done a neat job of the psychotic villain.

And, I dunno why throughout the movie, the characters keep praising Ilayaraja. That too, in comparison with Rahman. I can understand that this movie was made during Rahman's Oscar glory and may be that's the reason the film makers decided to justify Ilayaraja against Rahman and through Arya's character, they say that although Rahman is great, Ilayaraja is the greatest! I didn't like this comparison game which went on almost throughout the movie.

Overall, the film is worthy to watch, but beware about the final thirty minutes, which makes us to question about the logical gaps (holes!!) in the script.

Sarvam – The pain of loss.

All gloss and glitter!

There are three plots in Sarvam.

1. Chakravarthi avenging the death of his son

2. Romantic track of the lead pair

3. Hero's bonding with The child as he vows to protect him.

There was nothing novel about the romantic track - a typical boy meets girl kind of expected storyline. Trisha didn't seem fully convinced about the movie and it showed.

The hero was just passable (read that needs time to polish his skills).

Chakravarthy seems to be possessed by the ghost of Kamal Hassan. Very very lame.

Sarvam starts off with a quote from from the Upanishads - don't be fooled into thinking the movie would deliver a high quotient drama. The storyline is stale pretty much rotting since 1970's. There are too many cinematic liberties. The packaging is glossy which deserves special mention. Cinematographer should be applauded for the rich visuals (be it Munnar, the rains or the song sequences). A few songs are good while the rest are jarring. And yes, the action sequences well executed. Finally the movie could have easily trimmed by 45-minutes - yes you read that right, for there were lots of places where it seemed a drag. Especially so when its such a predictable fare! Lastly - the CGI's were used well.

For multiplex audience, its a full time-pass outing.

PS:: Ilayaraja vs. Rahman - tch! tch! can it sink any deeper?

The movie basically the theme is good but vishnu vardhan failed to catch the audience response in the second half of the movie.The first half is mind blowing performance by Arya and Trisha.All the songs are very good with excellent choreography and locations behind the scenes are nice.The only mistake in the movie is the Villain.He is utter waste in the movie.His acting is poor.

Once watchable only the first half and second half is very bore.Yuvan done his best in his music performance.There is one song in that movie in which Arya hits many vehicles such that nothing happens to him.That camera work was excellent.