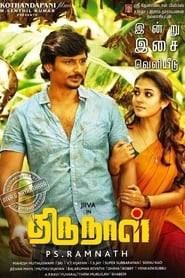 A local rural thug who works for politicians, falls for a girl's love.

A local rural thug who works for politicians, falls for a girl's love.

Jiiva as 'Blade' Ganesh
Nayanthara as Vidhya
Karunas as Mani

A rural flick that could have worked better !!!

Thirunaal marks the comeback of Jiiva - Nayanthara combination after a long gap of ten years. It is also quite a while since we saw the duo in a completely rural based flick. Thirunaal, which had several postponements due to reasons unknown, has finally seen the limelight.

Thirunaal talks about the life of 'Blade' (Jiiva) a local goon working for Naaga (Sharath Lohitashwa). He falls in love with Vidya (Nayanthara) and thereafter problems start arising from various corners for Blade. What are those problems? Is he able to face those? The film answers all these questions.

Jiiva's performance as Blade has been convincing. He fits in perfectly as a local rowdy in a rural backdrop, with his mannerisms and body language. Nayanthara is ravishingly beautiful as usual. She travels throughout the film, but doesn't have much scope to perform. Sharath Lohitashwa, gets a terrifying introduction, but as the movie progresses, he just falls flat. Joe Malloori, Karunaas, Gopinath, Muneeshkanth, and others do what is expected of them. Veteran writer and actor Jayabalan is wasted.

Right from the first shot of the film, we are indirectly told that the film is going to be action packed, but one might feel, there is too much of glamour and melodrama instead. As the movie progresses, we might witness many deja-vu moments. Not just that, the screenplay is predictable at many places. Few scenes do not have any connection with the story, and one might wonder about the need for those scenes.

There is everything you expect from a commercial film, the villain introduction, love proposal, romance song, baddie deeds of villain, glamour, love failure song, item song and a climax fight, but Thirunaal falls into the age-old template of rural action films with masala elements. Had the film come ten years ago, it might have worked a little better.

Srikanth Deva's songs and background score are decent. 'Pazhaya Soru' needs a special mention as the song has earned a lot of fans. The cinematography is average, while the edit could have been crispier.

Director Ramnath has attempted to tell a message, but the message doesn't have an impact. He can be appreciated for giving the rurality feel throughout the movie. Having a set of talented cast in hand, the director could have made a great entertainer, but what we see is a run-of-the-mill drama.

Verdict: A rural flick that could have worked better had it been handled with an engaging screenplay