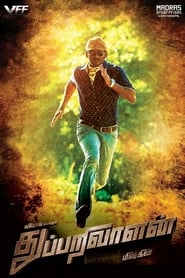 Mysterious deaths happens continuously, at the same time a private detective is waiting for an interesting case. A kid asks the detective to find the murderer of his dog, then he collects clues which are interrelated with the dog's murder. Is the mystery solved by the detective ? Written by naveenssssn

Mysterious deaths happens continuously, at the same time a private detective is waiting for an interesting case. A kid asks the detective to find the murderer of his dog, then he collects clues which are interrelated with the dog's murder. Is the mystery solved by the detective ? Written by naveenssssn

Mysskin's Homage to 221b Baker Street

Director Mysskin made history of sorts in 2007 when "Anjathe" came out during the heyday of Valentine's Day, Cut to the present 2017, Mysskin joining hands with Vishal for Thupparivalan (Detective) was a news which stifled me. Anyway it would be right to mention that cinema enthusiasts need to thank Myskkin for those bold initiatives in making Tamil cinema an attainable dream for countless young new wave cinema filmmakers.

So keeping aside the Hero Vishal I knew for the fact that Actor Vishal will be seen in the run time and the reason being its Mysskin's Film. I watched the movie on the first day as I do for all the Mysskin films except Chithiram Pesuthadi. Well I'd say Thupparivalan is neither Mysskin film nor Vishal film, it is a film which is possessed with content, depth and form.

Actor Vishal playing Kaniyan Poongundran has given his best in his filmography, he appears credible as a detective who doesn't hesitate to use force in order to accomplish some true to life spellbinding action scenes. Parallelly he is a seeker and the overall mood of the film is eeyorish despite few minor dose of profane humor.from the sidekicks be it villains or the supporting artists. Reason I state this is the previous Mysskin outings was supported with fascinating writing for the supporting artist which will leave a mark and some of them still do. Well Thupparivalan fails to score big with supporting artists. This doesn't prove that this flick isn't worth a shot it is a film which blends perfectly with constructive and meaningful cinema as it should be.

Oh, almost forgot to say a couple of words on the background score of the movie, the entire film is loaded and loaded with real ammo like score which speaks more with the mystery surrounding in the mind of Mano(Prasanna) who is just looking for nods while the protagonist is seeking to connect all the dots with amazing visual framing that heightens the adventurous movie-watcher.Good to see cinema like this today when our weekly releases have been flip-flop chicken flicks- blockbusters.

Mysskin has taken the essence and given us an Indian version of Sherlock Holmes. He has truly stuck to the core of Sherlock and produced one of the best thriller in Tamil movie. Vishal has excelled in his role. The background score , the fight sequence is top notch.

With a touch of empathy

A common aspect of Sherlock Holmes adaptions is the emphasis on the emotional distance between the detective and other characters, and in turn the audience. In Sherlock, the show uses this emotional distance to trick the audience to wonder what if Sherlock is only a very convincing and methodical con-artist? In this regard Thupparivaalan differs from other adaptations I have watched. Kanian Poongundran, the Sherlock Holmes styled protagonist here seemed to invoke a similar feeling of detachment to other people/things that populate this film's universe. Mysskin's triumph is in portraying the detective not only as a Canon Doyle hero donning a thinking hat, but also as a Good Samaritan Myskkin hero, whose life takes a different turn due to his act of kindness. With that move, Mysskin makes this film his very own.

Direction sets up an unsettling mood from the first shot, which creates a tension that continues throughout the prologue. There are interesting situations in other movies, that don't get an interesting visual treatment, that some times make you wonder what Mysskin would have done. The excellent set piece that introduces Mallika and her gang of pick pockets is a good example. Mysskin employs a consistent visual language to establish empathy. He draws your attention by slightly throwing off the film's rhythm, by forcing his characters suddenly come to a pause and encounter a new situation that demands their empathy. This is much more refreshing than using a reaction shot (accompanied by a beat or two of a thavil) for the same purpose. Mysskin use this technique to introduce Naveen, a child whose bereavement draws Kanian and Mano (Dr. Watson here is more like a Man Friday, which works just well) into a web of crimes hinted during the prologue. Mysskin stretches the moment, allowing the child to express his grief. This scene sets up the detective's quest not just as an intellectual exercise, but a deeply empathetic one. Mysskin uses the same technique to much better effect to come to a pause on Mallika, as she helplessly watches her siblings get punished by a mob during a botched robbery.

When it comes to establishing the setting, main characters and the seemingly unexplainable crimes, Mysskin's writing is strong. In true Canon Doyle fashion, the crimes committed are intriguing, outlandish and thoroughly entertaining at once. There is also a streak of bleakness, that tries to explain the other side to a Good Samaritan. Bhagyaraj's character offers some money as a token of gratitude to a driver - a minor character (also a Good Samaritan) he is not acquainted with, even though he is marked to be hit in one of the gang's plots. May be he has a little hope that the driver would survive or his family can subsist on the money. In contrast to this, in another scene you don't see any of this hope, as Bhagyaraj's character in his dying moments tries to put lights out on his helpless domestic partner.

The same happens in the dying moments of a character close to Kanian and Mano. The duo give up right away, as they realize out what's happening, and don't even attempt a rescue, even as the said character continues to breathe and is able to muster a few final words. And Mysskin stretches the scene, allowing Kanian to emerge out of his surface level indifference to the character, but this only unnecessarily restates Kanian's empathy towards the character which was far more convincingly established earlier. The long scene also allows you to wonder why he would be so helpless enough to try to save the character at the moment.

May be the whole point is to show how a Good Samaritan reacts when the person in need is dear to him. Is he still able to still ask what should I do next, or is the situation far too overwhelming? While this may be a sufficient explanation in the hindsight, but when the scene itself was playing, it was hard to ignore the severe dissonance Kanian's actions cause. To make things worse, Mysskin passes the opportunity to explore whether Kanian's pursuit becomes personal after this incident, despite setting the stage for that. He stages the scene by blocking Kanian and Mano in a position similar to Naveen (the child) was when he was first introduced after his personal loss, but does not explore their grief any further. Instead he introduces a pivot that only does a little to move the plot ahead. He cuts to a scene heavy with exposition, as the detectives get information about the antagonists.

A few of the set pieces work: the bike chase sequence is interestingly shot, where the tension steadily builds up and ends with a bang. But there are other set pieces where Mysskin lets your attention drift. The fight sequence at the Chinese restaurant is an unnecessary digression that lacks the intrigue that accompanies fight sequences from Mysskin's earlier work. The climatic fight sequences also seem long and filled with pointless deaths.

A common theme in this disappointment is how Mysskin builds a scene to make you expect a pay off, but fails to deliver the pay off, especially towards the end. When Vishal and Andrea's characters have a stand off, Mysskin creates a very noticeable pause raising the stakes, only to deflate it suddenly by cutting to a character who is stabbed and bleeding. Even though the climax also tries answer some questions about who the villain really is, it leaves a huge question mark over the relevance of this exploration. But the final stretch with its unexpected sprinkle of humour, redeems the climax and winds down on an empathetic note, as Naveen's quest comes to a completion.

The film is not without its flaws, but this is a rare demonstration of excellent directorial craft from one of Tamil cinema's master directors.

Mind blowing and gripping screenplay with a bit lag of first half which is worth enough to hold the breathe.

Every Character has done a great job and Vinay and Andrea made their shine.

Director has a gripping screenplay which makes you to sit for 2.30 hrs on the edge of the seat.