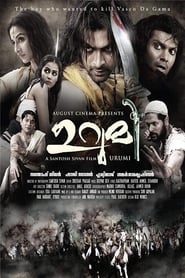 Chirakkal Kelu Nayanar, a warrior in 16th century Kerala wants to avenge his father killed in a confrontation with Vasco da Gama and his troops and is assisted by his best friend Vavvali and warrior princess Ayesha.

Chirakkal Kelu Nayanar, a warrior in 16th century Kerala wants to avenge his father killed in a confrontation with Vasco da Gama and his troops and is assisted by his best friend Vavvali and warrior princess Ayesha.

Ek Yodha Shoorveer Review: Hi friends, In this exciting post, i am going to publish review of India's greatest adventure epic film Ek Yodha Shoorveer. Today, i have watched this film at Zee preview theater, Fun Republic. After press release, i entered in theater along with guest audiences and started to enjoy film. After watching this movie, i will have to say that Ek Yodha Shoorveer is one of the greatest film of Indian cinema. Plot of the film is from 16th century when the Portuguese sailors under Vasco d Gama (Robin Pratt) discovered India captured some lands of South India.

We should appreciate director Santosh Sivan for making this historical film in great way. He is also cinematographer of this film. Acting of Prithviraj, Genelia Dsouza and Prabhudeva are superb. Every characters are looking real. Genelia looks too pretty and showcased extra ordinary act. Acting of Amole Gupte in the role of Chirakkal Thampuran will attract audience and make laugh for some moment. Vidya Balan is looking gorgeous and hot in the role of Teacher Bhumi and Makkom receptively.

We should also appreciate the creative art direction team. They decorate every frame according to screenplay. Screenplay should be more better, but neglect it because No one can give 100%. You will love songs and item number of this film. At last i will say that don't miss Ek Yodha Shoorveer and go to your nearest theater.

I love watching films from South India and never mind the language barrier. I feel true cinema requires no language to be watched, understood, and felt. I would happily say that this Prithviraj Sukumaran starrer film EK YODHA SHOORVEER, is truly that film. A dubbed version of the Malayalam superhit film URUMI, which released in 2011 to positive responses, is a true entertainer as well as important history lesson for everyone.

Since the release of BAAHUBALI THE BEGINNING and it's huge success in Hindi language, various south Indian films like Puli and Rudhramadevi too were released in Hindi last year. But sadly these films couldn't make much impact at the Hindi Box Office. But I can confidently say that from the way it's made, EK YODHA SHOORVEER has all the ingredients to make it a blockbuster : superb action, high quality visuals, power packed screenplay and performances with emotion, and of course, a wonderful filmmaking.

Prithviraj rocks in his role. This is his first as well as the first Malayalam movie I have seen. He is terrific in every single frame. Prabhu Dheva, who's his partner in the film, plays his part extremely well. Especially in the climax, his performance will make viewers break down with tears. Genelia does her part well. Same for Nithya Menen, she acts well and has a good role to essay. Every other actor does very well.

The war episodes are tremendously excellent: this is not a fantasy film, though. It's a historical action drama that narrates a good tale of that time in India, 16th century, I think so far. The action scenes are also amazing. The bloodshed during the war is presented as a historic poetry and not as a sequence glorifying gore. The film stands very high in all the technical aspects. The editing too is very crisp.

Songs were just fine, trimming a few wouldn't have hindered the fun. But, this isn't a big issue in such a great film. The story and screenplay of the film are both well written, well paced, and we'll executed. Prabhu Dheva also entertains in his comic timing and good chemistry with Nithya Menen. Besides, Prithviraj performs so well that one could hardly complain at all. The film has so good elements that one couldn't be disappointed.

Overall, EK YODHA SHOORVEER is one of the finest Malayalam movie to come in Hindi. Although I can't say much about its box office prospects, but I am sure that the film is likely to win audience attention. Besides, we mustn't forget that BAAHUBALI too gained attention and box office success slowly and slowly. So, will this YODHA emerge victorious? Well, I think, yes.

After this millennium began, we have seen a downward journey of Malayalam cinema. But occasionally, like the usage 'once in a blue moon', we did get to see some one-of-a-kind movies in Malayalam though. URUMI is one such. Spectacular movie. A sublime piece of film making. A movie worth watching. A cult classic. Everyone is just perfect. To me, Genelia is the true master-blaster in URUMI. Surprisingly, Prithviraj too has delivered such a wonderful performance. The King and his Nephew are two characters worth cherishing in this film, for their great comical acts. Nothing to say about Santhosh Sivan and Jagathy. Top notch. Superb script. Haunting music. In fact everything is just too good about this movie. My verdict, 10/10. Go and watch URUMI my dear Malayalam film fans......

Performances::Pritvi is outstanding in the movie with clear mannerisms and body language of Kelu Nair and has done his best performance till date.PrabhuDeva does his malayalam debut mesmerisingly,with a witty,light role.Genelia shows her excellence in acting by giving what her role wants in the best possible way.Other actors like Nithya Menon and Jagathy are casted in perfectly apt roles.

Some +ves::1)The script by Shankar Ramakrishnan is commentable and the dialogues are excellently written.2)Excellent music and choreography.3)Beautiful costume designing by Eka Lakhani,which requires a special mention.4)Commentable direction skills showed by Santosh Sivan.

Verdict::Urumi is a hearty fantasy movie enriched with artistic and technical brilliance,for all the good movie lovers. My Rating::8.5/10